If I asked you to tell me how many attempts each sales rep on your team has made this week, and what their attempts per contact, lead and sales ratios are, would you be able to give me an answer?

Half of the people reading this are already on board and could do it with no problem. The other half are most likely the same people who refused to get a smartphone. But look now… almost everyone has one today.

With how quickly technology is advancing, you have to adapt or get left behind.

No more rockin’ flip phones or playing “Snake” on that old Nokia, buddy.

If you’re not tracking these metrics, it’s a tell-tale sign your company needs a sales tracking software because you’re missing out on the insight and analytics needed to make your team more efficient. How can you fix a problem that you don’t know exists?

Making the decision to use this type of app is great, but you can’t be lazy. It’s essential you understand the top 5 reasons to track every attempt if you want to maximize profitability.

Ultimately, all you really care about are these three little letters: ROI.

If that’s true, then there’s 5 metrics you must know in door to door sales.

If you haven’t been out in the field with your team and seen how much time you’re wasting by using lead and street sheets, you might want to. They’re a huge time-suck, and there’s no value in self-reported numbers.

Making the jump to SPOTIO will double your team’s productivity in just two weeks because of their efficiency. They’ll also be able to collect more accurate information at the door much quicker. This eliminates the guesswork of knocking doors without a sales tracking app.

Using SPOTIO in the field allows sales reps to record the outcome of each and every attempt in a matter of seconds, literally. They no longer have to carry a large bag or binder; everything they’ll need is in the palm of their hand.

They can simply enter the result of that attempt while walking to the next house.

SPOTIO gives your team the ability to see where they’ve already knocked, and where they haven’t.

If you haven’t had a rep knock on a door they’ve already visited, you’re either lying or haven’t been in door to door sales long enough. Going back to a house that’s already told you to “kick rocks” is not only a huge waste of time, but it also makes that rep look like they have a hobby instead of a sales career. You want to be viewed as a successful and professional organization, not one that harasses people who say no.

2) They Get Referrals From Current Customers

Getting quality leads is often a large challenge for door to door sales companies due to a variety of reasons. One of the most profitable, yet under-valued lead sources are your customers. SPOTIO makes it extremely easy to capture referrals from your customers at the door.

The Significance of Referrals

There needs to be a significant emphasis placed on your sales team getting referrals from the customers they sell to. Developing a quality relationship with that individual or business makes this process more effective.

SPOTIO not only makes it quicker and easier for salespeople to enter referral information, but tracking these high-value targets is extremely simple. 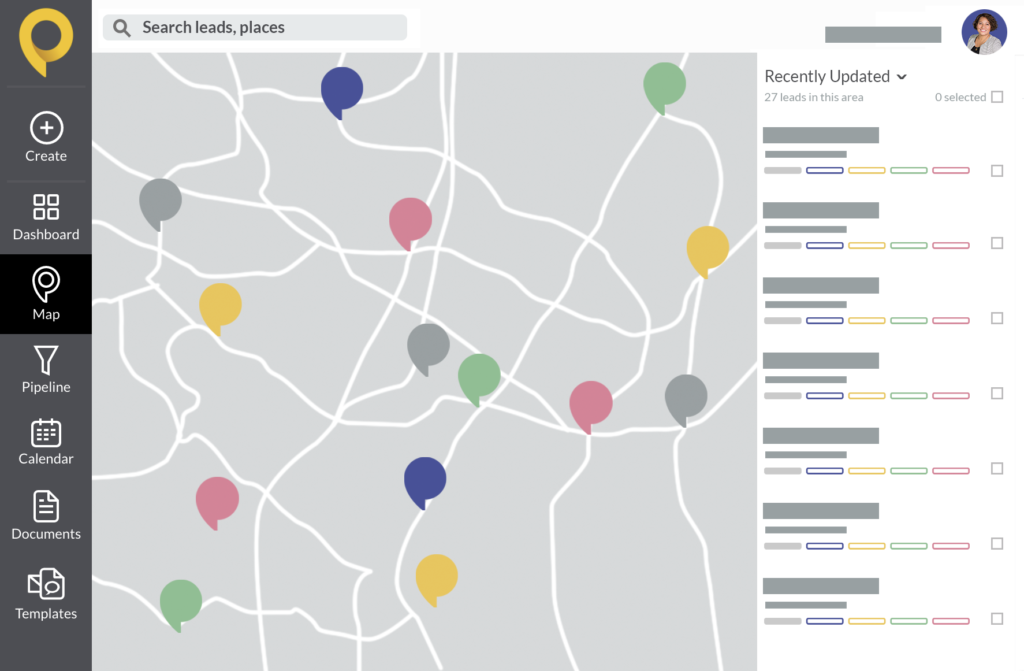 The worst thing that can happen is for a referred lead to not be worked properly because it got lost in the shuffle. You’re blowing money and decreasing your profit margin each time this happens. Plus, you’re wasting the highest converting, and cheapest leads you can get.

3) They Use Current Customers As References At The Door

While there needs to be a significant emphasis placed on getting referrals, another way our customers see an immediate increase in sales is by using customers as references during their pitch. References aren’t the same as referrals.

With referrals, you’re specifically asking a customer for the information of people that may potentially be interested in your services.

With references, you’re going to use your SPOTIO app to pull up a map of your current customers and sell to those homeowners.

While you’re at the door speaking with that person, you’re going to show the prospect the number of customers around them. You can say something like, “You know John Smith down the street at 1234 Rodeo Drive? He actually hired us two months ago and loved the work we did. In fact, we have 30 customers who have trusted us to work on their home within a half-mile radius of you.”

Using current customers as references helps you instantly establish credibility for your company and build rapport with that prospect.

4) They Canvass Neighborhoods The Right Way – Around Current Customers

Piggybacking off of #3, SPOTIO users see an immediate increase in sales by knowing where their customers are. To generate more revenue, you have to know the right way to canvass a neighborhood.

The more customers in an area, the better. Gaining referrals and using customers as references are incredible strategies to increase sales.

The problem is most companies aren’t mapping where their customers are, making it difficult to sell in that neighborhood. One of the six principles of persuasion is social proof, which states that people pay attention to what others around them are doing, whether consciously or unconsciously. 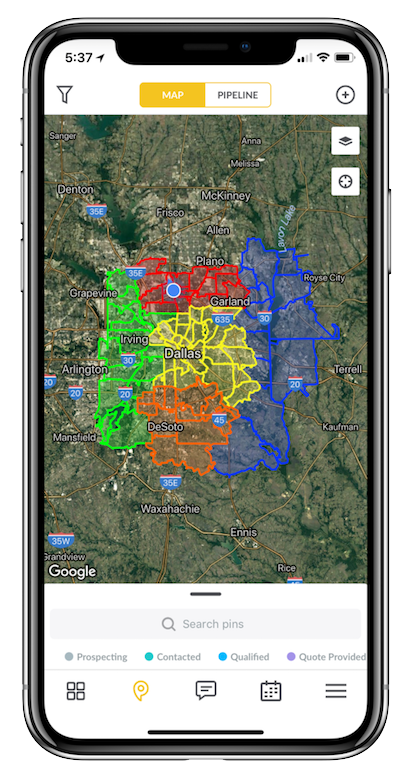 This is never more prevalent than in the solar industry. A CityLab report found “one of the best predictors of whether people install solar panels on their house isn’t their age, race, level of income, or their political affiliation. It’s whether their neighbors did it first.”

The second you get a customer in a neighborhood, you should start working in and around that area. This is true for any industry, but especially in solar.

With just a couple clicks on their app, sales reps can show the prospect a map of all of your current customers around them. People talk. Working a small neighborhood or territory is a great way to establish brand awareness and see a quick increase in your closing percentages.

Using this strategy will allow your team to schedule their calls and appointments in close proximity to each other. Maximize profitability by helping your team reduce travel time. This isn’t possible without the ability to see where your customers are on a sales mapping software.

5) They Hold Their Team Accountable With Technology

Companies using SPOTIO also see an immediate increase in sales by staying organized. They’re able to plan and execute more strategically in terms of how they canvass neighborhoods, and they eliminate the human error element.

What happens when a sales rep gets fired or they quit? If you’re using pen and paper, you might as well kiss whatever notes they had goodbye. You have no record of any of their attempts, or more importantly, their leads. 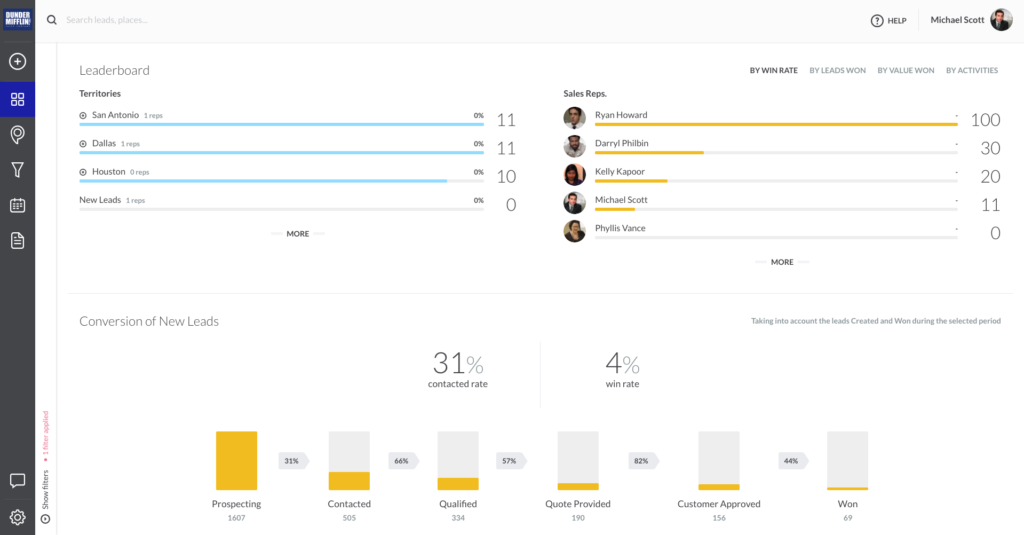 With SPOTIO, you’ll always have access to that information. Regardless of why a sales rep is no longer with your company, it’s extremely easy to change their pins into another person’s name. This will give the new rep access to all of the previous notes and conversations, that way they’re not having to guess.

Some of SPOTIO’s most valuable functionality is in the ability to track and monitor your team’s performance. One of the largest issues facing field sales teams is ensuring your team is actually working; making sure they’re doing what they say they are. One of the fastest ways you’ll see sales increase is just by having the tools to hold your team accountable.

With the functionality to verify a rep was at the door when they made that attempt and find your team by GPS while they’re on the clock, you’ll never be left wondering where they were or what they were doing. Not only can you verify their location for each attempt they make, you’ll also improve the accuracy of your metrics by eliminating self-reported numbers.

6) They Use Metrics To Determine What’s Efficient & Effective

You don’t have to be a “numbers guy” to figure out how to knock less doors and have more quality conversations with SPOTIO. The dashboard automatically calculates all of your metrics, giving you specific data that will tell you where adjustments within the sales process need to be made.

Our customers see a significant increase in sales by using the best day and time to knock provided on the dashboard.

The dashboard will tell you what days and times you have your highest contact rate, allowing you to be in the field during peak hours. It’ll also provide you with the insights you need to see exactly where a rep is struggling or having success.

It automatically tracks certain metrics like your attempts to contacts and attempts to sales ratios. If a sales rep on your team is knocking a ton of doors, but not seeing the number of leads he / she should for that level of output, you know they’re struggling with their pitch or setting the appointment.

Knowing this type of information allows you to effectively coach your team in the areas they need the most attention. Most managers don’t struggle with the coaching aspect of their job, but determining where they need to spend time training. SPOTIO dramatically simplifies that process and eliminates the guesswork.

We promised you a 37% increase in sales, here’s how we got there:

If 8 out of 10 customers refer 1 lead (according to Hubspot) that means customer referrals give you 8 new leads and 4 new sales opportunities (assuming a 50% lead to opportunity conversion rate). Because those leads are 4X more likely to close, it’s fair to say that would be 4 wins, or, a 40% increase.

Leveraging one of the mentioned channels (i.e. “referrals” – see above), its safe to say you will see a minimum 37% increase in sales.

SPOTIO is the #1 field sales automation and performance management software that will increase revenue, maximize profitability, and boost sales productivity.